The dangers of too much HGTV

I adore watching HGTV. I just love it. I'm not particularly dedicated to a certain show, although I really like House Hunters, Generation Renovation, and Landscapers' Challenge. I can simply flip to that channel and pretty much find something interesting the watch.

The problem is they make it look so darn easy.

My husband and I found this out about four years ago when we went to Daddy Bird's for Christmas. Daddy Bird was coming down with a cold and went to bed early; there wasn't a whole lot to watch on television outside of a marathon of some sort on HGTV, so we watched that. And went home and painted the stairwell and parts of the "bunker" (our word for the finished basement which houses most of our book collection as well as main computer).

So you would think we'd know better.

However, Daddy Bird was up visiting and when Daddy Bird visits we like to get home improvement and repair projects finished. It's either that or he spends too much time watching NASCAR and baseball, and he gets restless and bored. He's good at home repair, and I learn a lot from him which is why I'm really good at fixing toilets and sinks and stuff like that. It was so freaking hot and humid that we decided that anything that needed doing was going to be done inside where there was air conditioning.

I had this idea this past winter that I wanted to redecorate the guest bathroom. I had a red and white vision with blue accents and accessories. I wanted red walls, with white beadboard on one wall. I'd seen pictures of similar styles in Southern Living (the guidebook for all things decorating down here in My Beloved South), and I figured it would look okay. So I bought the paint when it was on sale in January.

We figured this would be a good project that would take, at most, a day.

But it looks great. It's not finished...I'm going to have to apply a special primer and then paint the vanity cabinet since I'm on a budget and really can't afford a new one right now, plus eventually I'm going to replace the faucets and the floor.

Any guesses on how long it's going to take me to tile that floor??? 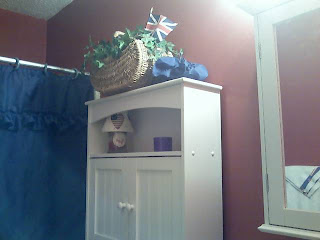 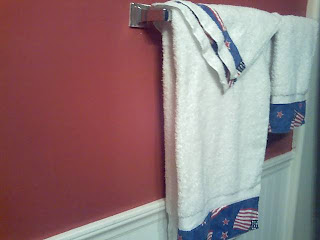 I like the colors! I looks sharp! I can't believe you only have 6 days left until school starts! Wow!

It does look fabulous. Something a History major would approve of. And yes, six days until I see students, too.

Looks great! Love the color. That's the thing about bathrooms... they look so small. You think, "How long could it take?" But there are so many nooks and crannies to paint around, it's actually a big job. Congrats on finally get it (almost) done!

I painted mine yesterday. Still have some edging to do, and I need to go get more paint. Oh, my aching back!