I grew up in Southern California, the Land of Perpetual Drought, so I know a little about dry weather. To this day, fifteen years since I left The Golden State, I still am somewhat obsessive about wasting water. You spend a childhood having things such as "don't wash your car unless you're parked on grass", and "don't run the water while you brush your teeth", yammered at you all the time, you tend to have the habit of conservation somewhat ingrained.

However, I've never seen anything like the drought we're undergoing right now in My Beloved South. Southern California, after all, is brown most of the year. It's part of the landscape and it has its own desperate beauty. Here, however, we're used to green most of the year - green trees, green lawns, full green flowering shrubs, you name it. We're used to mowing the lawn at least once a week and sometimes complaining that we can't get it done in between rainy days and thunderstorms. 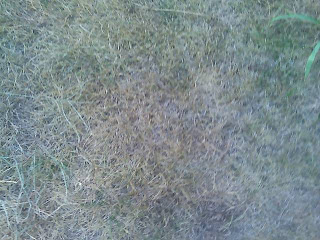 We haven't mowed our lawn in six weeks. Hubby gets out and weed wacks a bit here and there because weeds apparently can survive anything, but our mower has been used maybe three times since spring. The grass crunches. Even the crabgrass is looking stressed and I'm under the assumption that nothing can kill crabgrass (because I've tried just about everything). This is a a somewhat blurry picture of my lawn, or what's left of it. I don't have a decent digital camera so rely on my cell phone camera which is a pain to use in the sun - I can't see what I'm taking pictures of!! 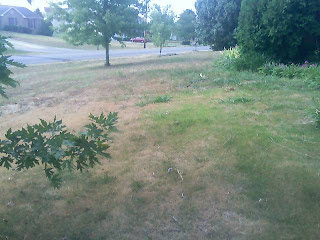 I've also taken a picture looking down the street and you can tell that all the lawns are in bad shape. From the pictures you can't tell how bad the trees are faring, but it isn't pretty. Many of them are losing leaves and what leaves they have left are starting to get brown and burned looking on the edges. According to the folks at the National Weather Service we have had no rain for the month of August. None. The result of this is, according to the news, higher electric rates because most of our power comes from the TVA which is primarily hydroelectric. The rivers are down and aren't generating the amount of power we need, especially since we're breaking records left and right with triple digit temperatures for days on end.

Many cities and communities are starting to go with water restrictions. The drinking water itself is tasting really muddy and musty right now because the warm weather and slow moving river water (where most of the communities get their drinking water) is perfect for algae to bloom, so it's going gangbusters. The result is nasty. It's safe to drink but tastes pretty repulsive.

As a teacher, especially one who gets to teach about weather, this is one of those situations that I can pull into a quick 2-3 minute lesson. We don't teach weather much until later in the year (right now I'm working on matter), but when the kids are talking about how hot it is and how the water tastes icky and how people are dying in Memphis because of the heat, well, that's a teachable moment. After all, these kids are getting onto school buses at 2:15 in the afternoon when the outside temperature is at least 100 degrees...I don't want to even imagine what the temperature is inside the buses. This is some science they can relate to.

And in the meantime, I'm going to stomp around and whine and complain because all my efforts at gardening are just burning up. The begonia below is croaking despite being tenderly watered nearly every other day...but the days on end of this heat is not something this plant is obviously used to. Poor thing. 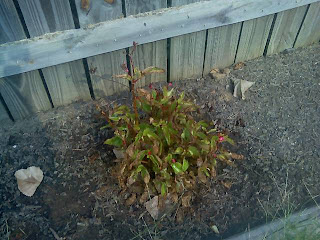 Good for you for turning this into a teachable moment. Wishing for rain for ya!

Yikes- we've gone through drought here, where the lawn is crunchy- it's awful.
To echo Happychyck, yay for taking advantage of a teachable moment!
Prayin' for rain...

It's crunchy, crunchy here in Georgia as well. I hate the heat. I long for highs of 78 and lows of 62 at night.