So the National Weather Service called for rain starting last night, turning to snow around noon today, and an accumulation of maybe 1-3 inches.

And they sorta got it just a bit wrong. 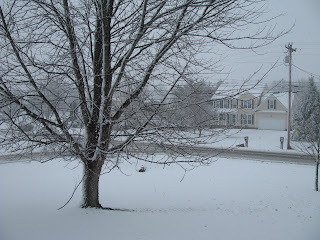 It was raining and 36 degrees when I got to The School this morning.  We went through 1st, 2nd, 3rd, no word of early dismissal which was a bit worrisome since Mrs. Social Studies had peeked out her back door and noticed that it had already turned to snow.  (We have no windows in our part of the building).  Halfway through 4th period The Principal came over the loud speaker and told us all to stop what we were doing and check our email.  Apparently we were going to dismiss two hours early, and we had a slight adjustment to the lunch schedule.  By the time we walked the kids down to the cafeteria, and past the bank of glass doors that go into the gym area, we could see that it was not only snowing, but snowing hard and everything was just covered.  This didn't look good.

We got the kids fed, went back to class and taught until around 12:10 when all the buses showed up and we dismissed the kids.  The good news is I got 3 periods taught.  The bad news is that it was a mess when the buses left.

I stayed behind, as part of the snow crew, for a while along with Mrs. Eagle.  We were supposed to be going to another middle school to see how their pilot STEM program was being implemented tomorrow, and worked on the sub plans for that only to get an email RIGHT AS WE FINISHED THE PLANS, telling us that the visit was canceled.  As I told Mrs. Eagle, if we didn't do the plans, we'd be going.  If we did them, we knew they'd cancel.  Oh well.

After about an hour we went up to check and see what the bus status was.  The whole idea behind us staying was in case a bus had to return or a kid didn't get picked up.  By then, it was a complete and total mess outside.  One of our teachers who lives in the county west of us decided that trying to get home was not a good idea, and had made arrangements to stay with another teacher who lives within walking distance.  She had called her daughter and they were reporting school buses sliding off the roads and people having to get 4-wheel drive vehicles out to the buses to get the kids off and home.  Not a pretty picture.  The Principal was on the phone trying to figure out if all our buses had made it safe and couldn't get a decent answer.  It didn't sound good.

She finally put her phone down and told those of us who didn't live within a few blocks to get home before it got even worse, and to text when we were home safely.  You didn't have to tell me twice.  By the time Mrs. Eagle, Mrs. Social Studies and I walked out to our cars, I had at least 3" of snow on mine and you couldn't hardly see the baseball fields behind the school.  It was wet, slushy, and coming down thick.

My 12 minute drive home took about three times as long, but for once people weren't being morons.  They were going slower, not tailgating (that drives me nuts) and I didn't see any wrecks on my way home.  That, however, was around 2:00 pm.  Since then we've had report of buses sliding off the road, some elementary schools just told the parents to come get their kids, and nothing but a huge big mess.  The local on-line paper reported that parents were swamping the district office with calls because the buses were late.   Another local news source is reporting over 80 wrecks.

I feel for these bus drivers.  It's not an easy job on a good day, but then having to deal with slushy slick roads, and poor visibility...they deserve a lot of credit for getting our kids home safe.  And I bet they won't get a cent of overtime for this.

And we're out for tomorrow.  The 1-3" is now looking like 4-8".  I'm beginning to think we may actually go to school again in March since there's another storm scheduled for Wednesday. 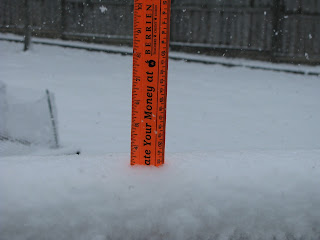 Wow. Sounds stressful... we had two snow days last week where it didn't actually snow, but it was below freezing and too cold for kids to wait outside for buses. Tomorrow there's a forecast for snow so I wouldn't be surprised if we had another snow day. This winter is crazy.

I would absolutely HATE to be a bus driver on days like that. I don't even like driving myself, much less other people's kids.
Usually when we call an early dismissal, our buses start showing up earlier than called(at least the drivers that live close enough).

Wow. We have had FIVE inclement weather days this year. That is INSANE for us in TX, where we rarely have one. Today it was supposed to snow, but instead it just iced over. Who knows what will happen tonight or tomorrow?
Our bus drivers are lucky, they rarely have to ever actually drive during the bad conditions. :)

Thanks for the Kudos. I speak for my fellow bus drivers when I say we appreciate when someone realizes the tough job we have.

I'm far enough south that we do not have major inclement weather (snow), but if it rains hard enough, our dirt roads get washed out and they HAVE cancelled school in the past due to the road conditions. We have 3 "inclement weather" days built into our calendar, yet rarely use them.

I know on days when they SHOULD have cancelled, a lot of us who travel dirt roads tend to get stuck in the mud and ditches quite easily and need to be towed out. The dirt roads get slick especially with the red clay.

Parents here would be beside themselves if their children had to walk to the house or get wet in the rain from the bus stop to their houses. During rainy days, we are expected to get them as close to the house as possible. Ok so why don't I just drive this big yellow limo right into your living room and deposit little johnny on the couch.. is that close enough for you? LOL