Take a look, dear friends, at my new toy. 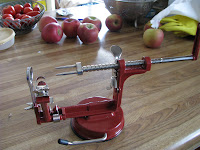 No, it's not a torture device to use on my Fifth Period Class From the Very Depths of Hell Itself...although it did cross my mind. It's a super duper all in one apple peeler, corer, slicer do-dad.

This is one of the reasons why I needed this little gadget. 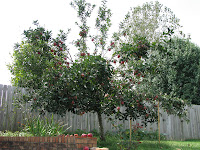 This tree is, this year, going absolutely freaking crazy. We're talking apples beyond apples beyond apples. And no, I have no idea what variety of apples they are as the tree came with the house. I do know that they are tasty and sweet and make killer apple sauce. All organic and no sugar added, thank you very much. 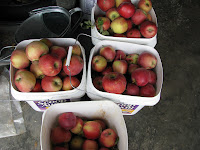 Here are four of my buckets of apples. I've had at least seven, and there's still a lot more apples on that little tree. So, since I tend to be frugal (hey, free apples!) and I sort of think of canning as one giant science lab in my kitchen, I'm making apple sauce.

Lots and lots of apple sauce.

A week ago, I hand peeled, cored, and cut up a bucket of apples and made four quarts of apple sauce.

I thought my right hand was going to cripple up and never work correctly again. This was not, obviously, going to work. So, I found out that one of my favorite stores, Linens and Things, sold apple peelers. Cool! So I went over after church to get one.

And they were sold out.

But there were 16 coming on the truck on Tuesday. Apparently I am not the only one with a very productive apple tree this year. I asked the very helpful lady to hold one for me and went back on Tuesday (when I was sicker than a dog with the crud which turned out to be an ear infection), and got my new toy.

It does everything but tap dance. A quick turn of the handle and I've got a perfectly cored, peeled, and sliced apple. Wonderful! 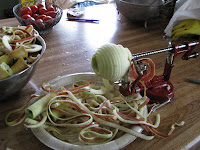 My father, the original gadget head, who was visiting for a few days, thought it was pretty cool. In fact, he thought it was so cool, he went and bought one. Not because he cans, but because he figures he'd make the doctor happier by eating more fruit because, hey, it's fun to jab it on the spikey thing, turn the handle and watch the peel curl off and the slices come off the end all perfectly even.

And he even took a bucket of apples with him.

And four quarts of apple sauce.
Posted by Mrs. Bluebird at 8:06 PM

This will cheer you up even more, and maybe give you some ideas about what to do with an apple or two.
http://web.mac.com/bernajeanporter/iWeb/Site/Story%20of%20the%20Month.html

I'm glad to hear you are feeling better!
Tanya B

I'm chuckling. My hub went to his parents "farm" and brought back about a thousand apples. He was going to make cider, both sweet and hard! So he sorts, peels, and quarters dozen of apples. Some got made into sauce (chunky with a few peels and seeds), some got made into three beautiful pies. Some got thrown over the back fence. Some got mashed and stayed in the garage for a week in a tub!! (yuck!) The tubbed mash has now been strained into 4 gallon jugs. Mind you this was never refrigerated. Every evening I say--"do not drink any of that stuff!!" I can see my picture on the front page of the paper--suburban wife kills husand with bad cider!!

We got the peeler, too but don't know if he ever used it! Too busy mashing the apples with his home homemade masher, made from paint stirrers.

What a neat gadget!!

We have the exact same apple-peeler! Ella Numera Dos loves Apple Crisp. We use that contraption several times a week. It's a Godsend!

We had an apple tree when I was growing up. OMG! Did we peel apples! Hand cramps and sour, wrinkly fingers! A few years after I left home, my parents bought a peeler, but I just could not be that excited for them after all the torture they put us through! Anyway...Some fresh apple sauce sounds really good right now!