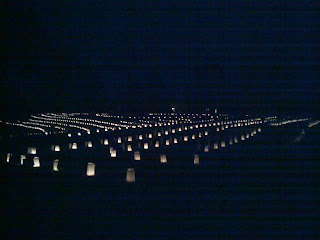 I didn't grow up in a military family, but I grew up in a family that respected the military. I had ancestors who served during the Civil War, some relatives in WWII - including my mother's cousin, Glenn Perkins, who was killed in Germany in March, 1945 - and my father credits the U.S. Army for "getting me the hell out of Dakota". Which is a good thing if you don't like milking cows when it's -40 outside. So in our family, Memorial Day is a day of remembering and thanking and not a day of simply guzzling beer and eating until we're about to burst.

So yesterday Hubby and I went out to Fort Donelson National Battlefield and spent some time out there. Fort Donelson is the first large Civil War Battle of the western theater, and one, as my husband likes to say, that serves as the minor leagues for some of the guys who became "big league" generals later on.

In any case, last night at the Fort Donelson National Cemetery, the Girl Scouts had placed flags and luminaries by every marker. Hubby and I had volunteered to help light them. So, armed with lighters (the long kind that can reach into a bag of sand), we, along with quite a few other volunteers, went to work. I know I lit at least 130 of them before I lost count. But after each lighting, I lightly touched the marker and said "thank you". It was, after all, the least I could do to honor the military veterans, both men and women, buried in that lovely location.

And after they were all lit, it was magical as you can see, hopefully, from the picture above.

And hubby and I both agreed we're going back next year and will make this a new family tradition. There was just something special about having the honor of lighting those candles for those men and women. I was glad we were able to do it.
Posted by Mrs. Bluebird at 10:05 AM

That was beautiful and made me a little teary eyed. Thank you. :)

That was a generous action you took.